A Peptic ulcer is a collective name for ulcers in the stomach (gastric ulcer) and duodenum (duodenal ulcer). The underlying mechanism for development of such ulcers is the same and hence, the collective name. Peptic ulcers are the result of an imbalance between gastric acid production and the protective lining of the stomach and duodenum. Common risk factors for the development of ulcers include smoking, alcohol, non-steroidal anti-inflammatory drugs (NSAIDs; a type of painkiller), psychological stress and presence of Helicobacter.pylori (H.pylori) bacteria.

The common symptoms of peptic ulcers include a gnawing pain over the upper central abdomen (epigastric region) that can occur before or after food together with nausea and vomiting. In situations of bleeding from the ulcer, the passage of black stools or fresh blood with dizziness and fainting spells are possible symptoms.

Patients with suspected peptic ulcers require a Gastroscopy (‘stomach’ scope) for evaluation. Anti-acid medications can be started immediately after the gastroscopy.

Similarly, the full evaluation of Gastritis requires a Gastroscopy. In younger patients, anti-acid medications can be started without undergoing a Gastroscopy. A Gastric Tumour is often referred to as a malignant/cancerous growth in the stomach. The initial symptoms of a Gastric Tumour can be fairly mild and consist of some upper abdominal discomfort, feeling of ‘indigestion’ and bloatedness or a sensation of feeling full even after a small meal. Some patients may notice the passage of black stools or decreased exercise tolerance due to a slow bleed from the tumour.

Late-stage symptoms include severe abdominal or upper back pain, an inability to retain food, severe loss of weight and severe breathlessness due to blood loss.

The evaluation of a suspected Gastric Tumour relies on a Gastroscopy performed promptly. During the scope, biopsies will be taken of any suspicious growths. The Gastroscopy also allows prediction of upcoming complications such as gastric obstruction and tumour bleeding.

The only curative treatment of a Gastric Tumour involves a surgical removal of the affected part of the stomach. This can be performed as a keyhole procedure or occasionally as an open surgery. Radiotherapy and/or chemotherapy may be required before the surgery to shrink the tumour and reduce recurrence rates. 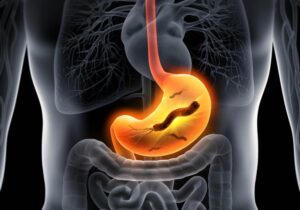 The Helicobacter. pylori bacteria (H.pylori) is a spiral bacteria that resides in the lining of the stomach. The H. pylori are one of the rare bacteria that can survive in the acidic environment of the stomach. The detection of H.pylori is very important as it can cause a variety of benign and pre-malignant and malignant conditions. The benign conditions include Gastritis and Peptic ulcers and the pre-malignant and malignant conditions include Intestinal Metaplasia, Gastric Cancer and Gastric Lymphoma.

H.pylori in itself does not cause any symptoms. The symptoms that arise will be those related to the underlying causative condition. Detection of H.pylori can be done by performing a gastroscopy utilising a rapid test or after examination of the biopsies obtained. A non-invasive alternative is a Urea Breath Test (UBT) that analyses the breath for the presence of by-products of H.pylori.

Treatment of H.pylori is a 6-week regime of antibiotics and anti-acid medications that must be strictly adhered to. There is a risk of failure of eradication, for which a more complex regime will need to be employed.