Acute Pancreatitis is a serious condition characterised by the inflammation of the pancreas. Pancreatic inflammation will result in severe pain in the upper-middle portion of the abdomen (epigastric region), often accompanied by severe upper back pain. Other symptoms include vomiting and fever and is often confused with other conditions such as gastritis, gastric ulceration or gallbladder inflammation. Pancreatitis is a potentially severe condition that can lead to a runaway inflammatory process in the body, resulting in multi-organ failure within days of pancreatitis. Treatment of pancreatitis requires close observation in the hospital and potentially the Intensive Care Unit in severe cases.

Chronic Pancreatitis occurs in the setting of long-term pain in the upper middle portion of the abdomen (epigastric region) with characteristic changes on either ultrasound, CT or MRI scans. Chronic pancreatitis occurs due to long term damage to the pancreas from the offending stimuli leading to permanent and irreversible structural changes.

The most common cause of chronic pancreatitis is long term alcohol abuse. Other much less common causes include smoking, high triglyceride levels, structural abnormalities in the pancreas leading to duct obstruction, autoimmune pancreatitis and a genetic/inherited cause.

Intra-Ductal Papillary Mucinous Neoplasm (IPMN) is a type of pancreatic cyst. Unlike simple cysts, IPMNs have the potential to develop into cancer in the future. There are two types of IPMN, namely Main Duct and Side Branch IPMN. IPMNs are benign pancreatic cysts though the differentiation between an advanced IPMN and a cystic pancreatic cancer can be difficult.

IPMNs do not cause symptoms unless they have grown to a larger size or if they have developed into pancreatic cancer. The symptom will be a dull discomfort over the upper central epigastric region. Symptoms such as loss of weight and worsening epigastric region pain and upper back pain occur with cancerous change. Yellowing/jaundice of the skin and eyes usually signify that cancerous change has occurred. 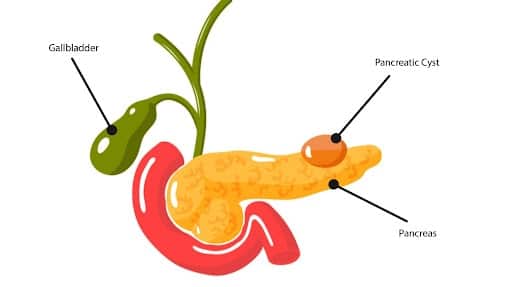 Small-sized side branch IPMN can be observed for a period of time but large-sized, side branch IPMNs and all main duct IPMNs need to be removed due to the significant risk of cancerous change.

Pancreatic Tumours (Cancers) are malignant growths in the pancreas. Unfortunately, due to the location of the pancreas in the abdomen, Pancreatic Tumours/Cancers are often detected at very late stages. Pancreatic Cancers are aggressive tumours with generally much poorer outcomes compared to other cancers at a similar stage. The overall 5-year survival for all pancreatic cancers can be as low as 20-25%. In its early stages, Pancreatic Cancers may only cause some bloatedness and sensation of indigestion at the upper central epigastric region. Being a very common symptom, most patients often write this off as due to gastritis or indigestion and this is one reason why Pancreatic Cancers are often diagnosed late. In the later stages, the symptoms include severe and unremitting pain over the epigastric region that often includes upper back pain.

Yellowing/Jaundice of the skin and eyes can also occur, particularly for cancers located more proximally at the head of the pancreas.

Radical excisional surgery is the only chance of cure for Pancreatic Cancer. Unfortunately, a lot of patients only come forward when the symptoms are severe and this often signifies a late-stage disease that may be inoperable.